Time to Stop the Yawning

Live DVD of Sligo Rags concert at Castoro Cellars in Templeton, CA in December of 2011. Features Galway Girl, Ordinary Man, The Whiskey Never Lies, Seven Crystal Glasses, and many other 'Rags favorites
SEE A VIDEO MONTAGE OF SELECTIONS FROM THE DVD BY CLICKING HERE!

Live DVD of Sligo Rags concert at Castoro Cellars in Templeton, CA in December of 2011.  Features Galway Girl, Ordinary Man, The Whiskey Never Lies, Seven Crystal Glasses, and many other 'Rags favorites
SEE A VIDEO MONTAGE OF SELECTIONS FROM THE DVD BY CLICKING HERE!

Acoustic Jazz-grass CD from 1998 featuring David Burns on guitar and banjo; Luke Halpin on mandolin and fiddle; Paul Toth on bass. Listen to some samples from this collection at http://alonetone.com/someguy60/playlists/timbreline-playlist

On If the Skies be Ablaze:
"If the Skies Be Ablaze is an album that truly should be in every music lover’s collection. The blending of numerous genres, the arrangements, and the sheer energy of their performance make it an absolute five star musician’s buffet. "
--Celtic Music Magazine

On Roll Me Down the Mountain:
"I enjoyed “Roll Me Down The Mountain” as much as “The Whiskey Never Lies”....a nice variety of songs is present on this album, and although I typically point out a favorite or two, I will refrain. This is a CD I think you should experience for yourself and see what rises to the surface. It’s all so good."
--Celtic Music Magazine

On The Whiskey Never Lies:
"Brilliant, and I'm loving it....
Best effort from the West Coast Celts
for years..."
--Shay Clarke, Blarney on the Air, Chicago;
Irish American News

"Another great record from the Long Beach/Orange Country favorites. Bluegrass, Classical and World Beat influences abound in addition to the Celtic ones, but best of all the original songs sit comfortably side-by-side with the traditional ones.  Engagingly played and sung with humor and skill."

On The Night Before the Morning After:

Every song is a gem, ably complemented by arrangements that preserve the music's Celtic origins while playing with flavors of other genres, including bluegrass and country.  Purists might cringe at such license, but believe me when I say it works.

One of the best CDs by a stateside band I've heard so far.

As Irish-trad bands go, you’d pretty much have to journey to Sligo to find anything better. We’ve actually been to Sligo, too, five years ago on a drive from Limerick to Belfast; the town wasn’t all that, but for road tunes, we sure would have preferred to have this record along instead of the sleepy Enya tape we picked up at the Waterford crystal factory gift shop.
--Rich Kane, Orange County Weekly 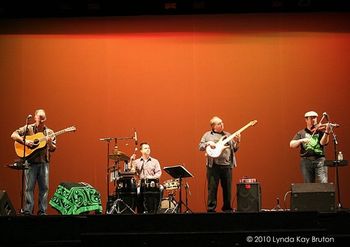 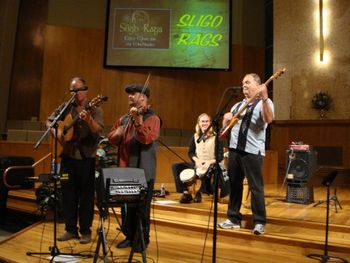